Within the archives of Hillman Library is the underground press collection, which offers a wide range of publications on various topics to learn from. I looked at copies from April 1994 to June 2003 of the local publication, Planet Queer. This publication, also known as Planet Q, originated in Pittsburgh and offered subscribers a chance to build community through sharing helpful resources, information, and events. In this collection, I found a multitude of examples showcasing a queer affectual response, utilized to combat homophobia.

There exists a distinct difference between LGBT and queer sensibility and community, evident in the content present in Planet Queer, which differed greatly from the typical, moderate response of respectability. Rather than seeing themselves as “just like everyone else” as many LGBT individuals do, queer people purposefully make a distinction, and create a space for themselves that is anti-normative, constantly challenging the norms and the mainstream. Rather than subscribe to a mainstream publication which might deny queer folks’ existence and struggles, Planet Q offered an alternate perspective, one that specifically played on those harmful views from the mainstream to show that queer communities are worthy and should be celebrated. Part of this tactic is simply survival- many queer people are literally killed by societal norms, so if there is no active fight to change them, and only work towards assimilation into these existing, repressive systems, then many people would be left behind.

There has always been a specifically queer reply to ridicule and oppression from a heteronormative society- in response to conservatism these tactics have changed over time, but there remains an undeniable affect in queer communities, rooted in camp consciousness. When the world you live in does not support you it is vital to seek safety in a community that does, and to create your own guidelines. This looming threat cultivates a particular attitude and form of resistance to mainstream culture and criticism. Rather than appeal to possible similarities, like a moderate LGBT response might, a queer response relishes in its differences from the norm, making a mockery of conservative reason. You simply cannot use the same logic back to a system of understanding that denies your existence.

This queer affect pointedly has no respect for respectability politics. Rather than respond to homophobia, racism, misogyny, and classism with appeals for their own humanity, a queer reaction understands that these people do not have a stake in seeing them as human, and they do not care. A queer response does not want to “go high when they go low”- instead they go even lower. Why should they have to sell their humanity to people whose entire system is built off of denying it? Even in the face of oppression, a queer response makes sure that they get the last laugh.

One specific tactic that Planet Queer utilized was openly mocking and satirizing outspoken homophobic media pundits. A frequent target of theirs was a news radio show host for KDKA, Fred Honsberger, who repeatedly made homophobic comments on his show, and called for homophobic action in the community. Rather than take this bait from Honsberger to plea for understanding that would likely never occur, the writers of Planet Queer turned the tables, making a mockery of him for once. Pictured below is just one part of a Valentine’s Day spread the publication ran in February 1995. In response to a comment of Honsberger, that singer Melissa Etheridge “might ‘change’ from being a lesbian for a chance to play around with superstar Brad Pitt” Planet Queer suggested that Honsberger’s sexuality had “changed” and that he was in fact head over heels for Brad Pitt. The writers take this jab to a next-level of campiness, stating with over-exaggeration that, “The gay community has been paralyzed by the possibility of gaining this particular new member. One activist openly wept when he heard the news.” 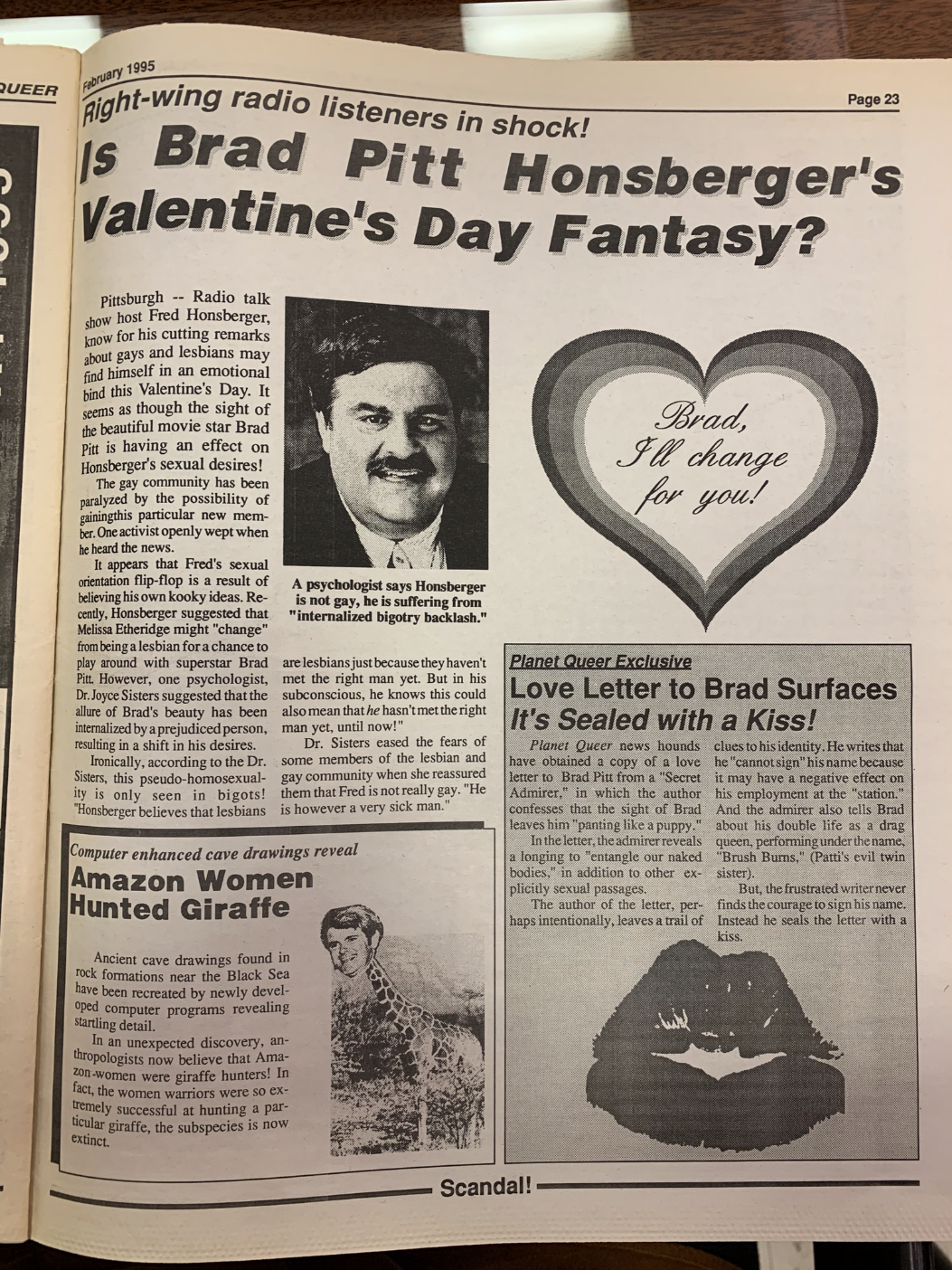 This particular spread was not the only one in the publication’s series poking fun at Fred Honsberger’s insidious remarks. The local Pittsburgh theme park, Kennywood, has many different community days, and hosted a Gay Day in May 1994,  specifically for members of the LGBTQ+ community to share in at the park. On his radio show, Honsberger “vowed to put an end to Gay Day once and for all.” In response, Planet Queer published a story (pictured below) about Honsberger being a “giant reptile” known as Honszilla and attacking the Thunderbolt rollercoaster at Kennywood’s Gay Day. 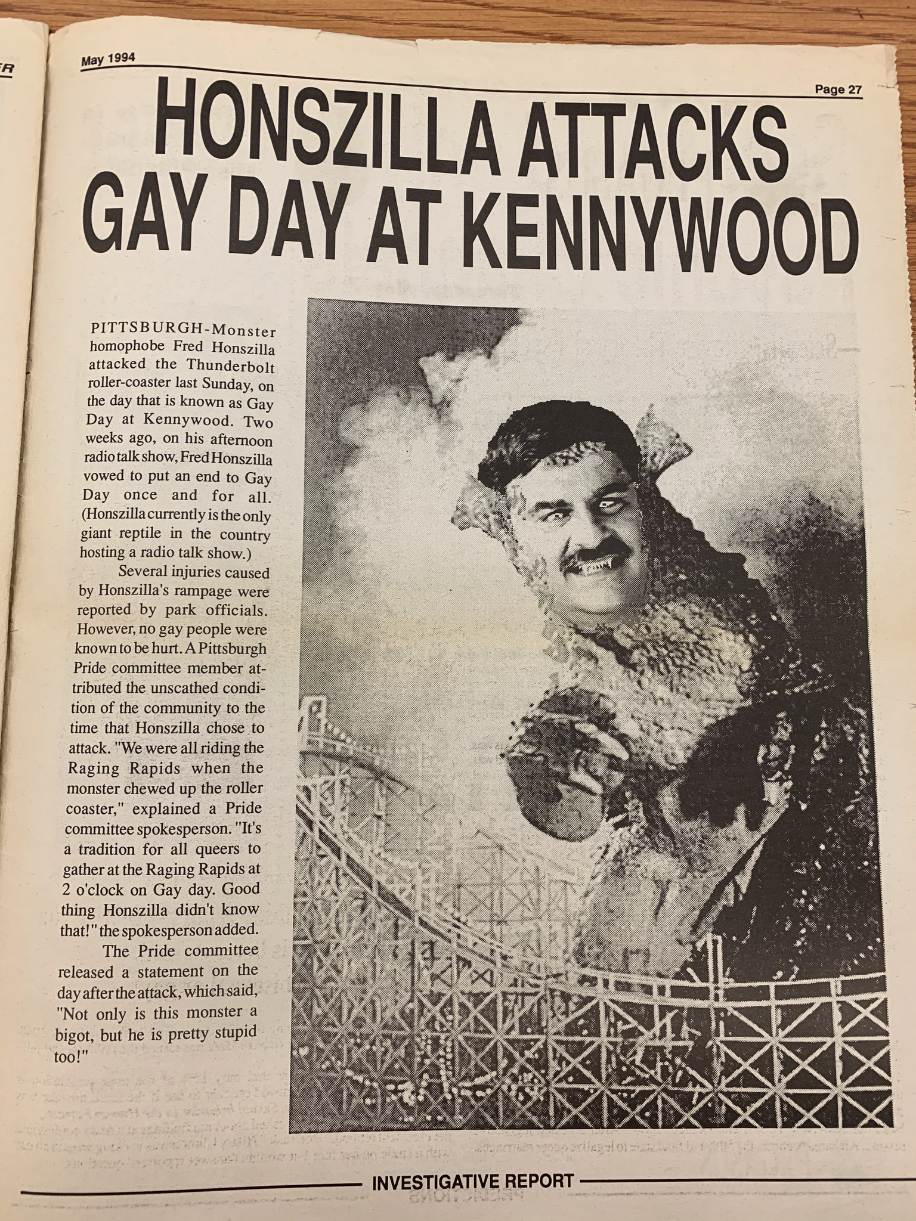 The article stated, “Several injuries caused by Honszilla’s rampage were reported by park officials. However, no gay people were known to be hurt. A Pittsburgh Pride committee member attributed the unscathed condition of the community to the time that Honszilla chose to attack. ‘We were all riding the Raging Rapids when the monster chewed up the roller coaster,’ explained a Pride Committee spokesperson. ‘It’s a tradition for all queers to gather at the Raging Rapids at 2 o’clock on Gay day. Good thing Honszilla didn’t know that!’ the spokesperson added.” Rather than validating Honsberger’s ridiculous claims by earnestly arguing back, Planet Queer empowered its own community, poking fun at themselves, and making homophobes like Honsberger the butt of the joke instead.

Despite being published over a decade ago, the lessons from Planet Q are just as relevant today. One clear example of this queer affect in current events occurred to a former director for the Bernie Sanders campaign, Ben Mora. On a private twitter account with few followers, Mora, an openly gay man, made several political jokes, many about other politicians. One example was a tweet stating, “Could never trust buttigieg because he combines the natural devious disposition inherent in gay men with a bloodthirsty careerist drive.” Another showed a picture of a tote bag with the words Let’s Get Buttigieg To Quit written on it in rainbow marker, poking fun at the LGBTQ moniker which former presidential candidate Pete Buttigieg was proud to be a part of. Mora’s twitter account was clearly a private form of expression- meant to be shared with close friends and followers as a way to let out steam while working through a demoralizing campaign. However, Mora was ousted and doxxed by a journalist and rampant Elizabeth Warren supporter, who caused Mora to be fired, and thus without any income or healthcare. Luckily, Mora has continued working, writing articles and appearing on podcasts to discuss this incident and his stance on it. There exist many connections between Planet Q’s approach to critique and satire and Ben Mora’s approach through his private twitter account. Rather than “play nice” Mora openly attacked, with wit and sneer, political figures who obviously did not care about creating true equity, standing against policies that directly impact regular people, such as universal healthcare. However, rather than playing along with their political games, Mora did not attack these politicians directly for their views, but made jabs about other aspects of their life- much like how Planet Queer did with Honsberger.

In an era of stagnant respectability politics, it’s just as important now as it was at the start of Planet Queer to remain vigilant and consider a queer theory-driven approach to adversity. It is critical to remember who and what you are fighting for, if those goals can be met with a serious appeal from existing institutions, and how communities can be mobilized and solidified to meet their true goals. There is ample inspiration from a publication like Planet Q on how to turn mainstream ideas of power on their head, and constantly fight back against oppression without sacrificing your own humanity.